From Bikinis to Burkinis (Part Two)

The Australian swimmer called Annette Kellermann was the first person to wear a one piece swimsuit. She was then arrested and charged with "indecent exposure in public places." But then, the one piece swimsuit became popular in the Western world. People began to reveal their arms, legs, necks and other body parts covered in the past.

In the 1940s, the rise of World War II made men run away from home. Women, in addition to raising their children, had to support their families, which made them become more bold and independent. This is reflected in the swimsuit, that is, the emergence of the bikini.

The origin of the bikini's name is neither sexy nor romantic. It came from a atomic bomb test occurred in the Bikini Island (Bikini Atoll) in 1946. The French designer named Louis Reard foreboded that his bikini would set off the uproar in the community like the atomic bomb explosion, so Louis Reard named the swimsuit after the Island.

Because bikinis made too many body parts exposed, they were banned in the European countries and were called "sinful" by the Pope of the Vatican. After the publicity of female stars as well as the rising female consciousness, it was believed by many women that they could decide their own bodies and chosen the clothes they wore. Bikinis have become very popular since then.

However, after half a century, when women wore fewer and fewer clothes, it seemed that the old saying that things will develop in the opposite direction when they become extreme. Some women began to wear the clothes they took off.

In Australia, a kind of swimsuit called the burkini, alos the Muslim swimwear, which was made for Muslim women appeared in 2006. The burkini is similar to the swimsuit in the Victorian era, and it can cover the body part from the head to the feet and can make only the face and the hand exposed. It is believed by the Islam that except the face and the hand, all other body parts including the hair belong to the Awrah, which can not be seen by others. For women who love swimming, the burkini seems to be a piece of good news for them, because they can wear the burkini and then go to the beach, complying with their manners.

In fact, in terms of the swimsuit, it is of great significance that whether women can decide the clothes they wear by themselves. In the past, women proved that they freed themselves through the way of wearing clothes made of less cloth. It can be said that the swimsuit is only a small step in the progress of feminism. What women have kept pursuing is making themselves more comfortable and more beautiful. 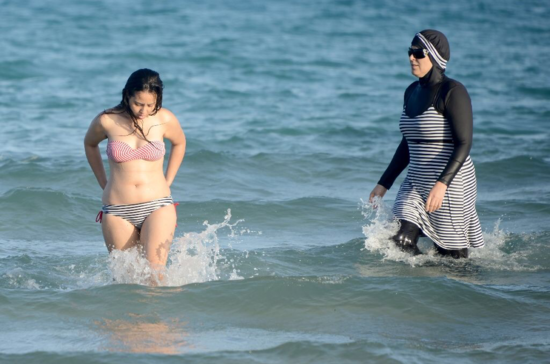